Commercial and Marketing in Figures

Ecopetrol’s Commercial Strategy
Ecopetrol has undertaken (i) to be the best option for the commercialization of heavy crude oil in Latin America for its clients, and the Ecopetrol Group is committed to quality, reliability and flexibility and oriented towards the generation of value supported in its assets, (ii) to provide fuels and environmentally friendly petrochemical products that contribute to the development of the country and with a view towards international markets, and (iii) to expand the generation park and energy sales generating value through the optimization of Ecopetrol Group’s assets within an energy transition environment.

In 2019 Ecopetrol, implemented the transformation process as an area, which began in 2018 with the purpose of achieving commercial excellence and internal optimization to generate greater value for Ecopetrol Group, seeking to turn Ecopetrol into an optimizer of the value chain and a commercialization agent supported on its own assets.

This transformation entailed an adjustment in the structure and processes in search of functional and product-based specialization, which allowed to face the great challenges that the market presented us in 2020 with a greater focus on the client, as well as construction of a culture based on four pillars: external focus, proactivity, collaborative work and risk management.

The reference Brent for export crude oil was quoted on average at USD $ 43 / barrel in 2020, i.e. a USD $ 21.2 / barrel decrease as compared to 2019, due to the increase in inventories as a result of the lower demand generated by the pandemic. 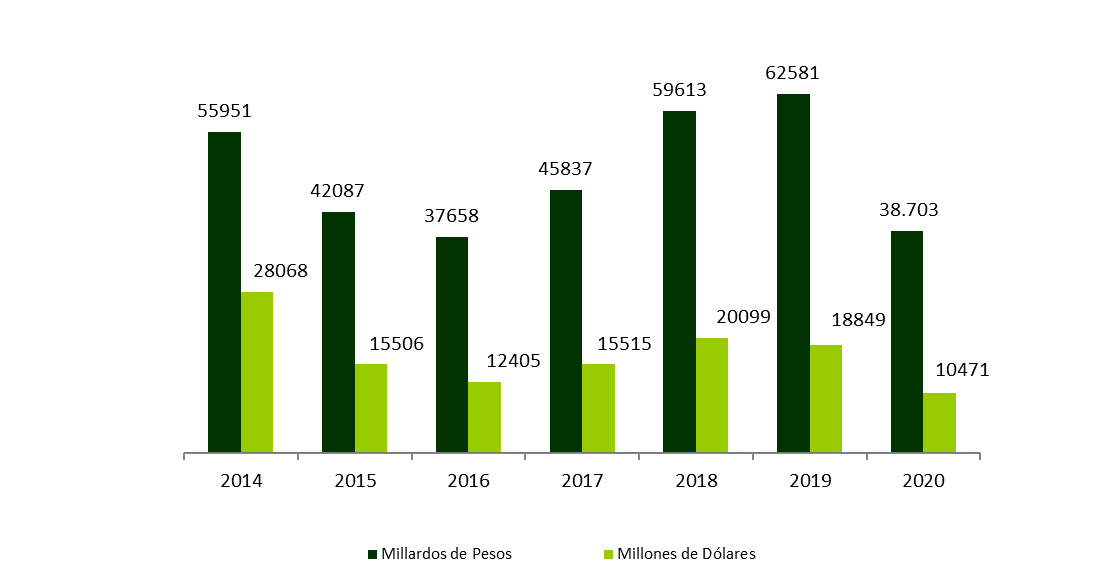 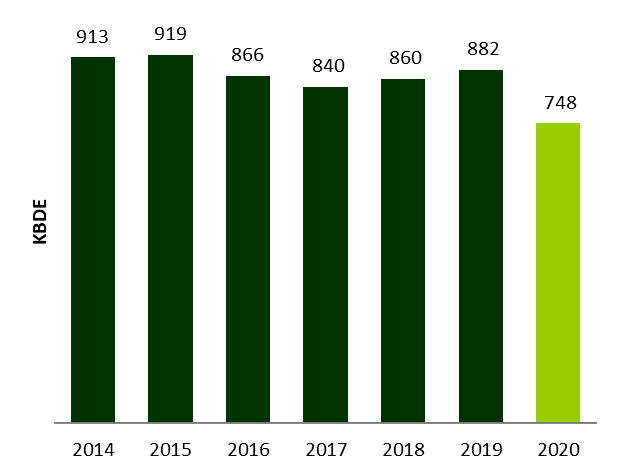 * Only considers Ecopetrol S.A.les (does not include Reficar). Does not include natural gas and LPG from 2020, as said volumes are reported by the Vice Presidency of Gas.

As for the total volume sold, exports represented 52% and national sales 48% considering sales to the free trade zone. On the other hand, crude oil sales increased by 1% (+7 kbd) as a consequence of lower refineries loads.

Below is the information on crude oil, fuel oil and asphalt exports

Crude export earnings fell due to the weakening of international prices.

Ecopetrol continued to focus on market efficiency and diversification of destinations to reach those regions that best value crude oil. Particularly this year, in which there was an oversupply of crude, the Company managed to place all its barrels in the target markets in a sustainable and profitable manner.

The main crude export destination in 2020 was Asia, with 52% of the total volume sold and a 4% growth as compared to that observed during 2019, which was 48%. The presence of India is noteworthy as an important and recurring export destination, as well as the direct arrival in South Korea with 1 million barrels. The second destination for crude oil exports was the United States – specifically the Gulf Coast – with 40% and a 2% decrease as compared to what was achieved in 2019 (42%). Spain was the third export destination, with 2%. The rest of the percentage was destined for Europe, specifically Germany (new market for this year 2020), as well as Central America and the Caribbean, which became intermediate storage points used by customers for subsequent shipment to the United States and Asia, mainly.

Ecopetrol exported fuel oil, reaching a volume of 25 kbd in 2020, i.e. a decrease of 17% as compared to 2019 (-5.0 kbd). This was caused by a reduction in production due to the lower load at the Barrancabermeja refinery, as a consequence of the effects of the decrease in the demand for fuels.

Fuel oil exports were sold mainly in Central America and the Caribbean with a 55% share. As we have already pointed out, this is an intermediate storage point used by clients for subsequent shipment to other places. The second destination was the United States, with a 17% share and the third was Europe, with a 13% share.

The average differential of exported fuel oil in 2020 was -USD $ 13.8 per barrel compared to Brent, which represented a decrease of -USD $ 0.3 per barrel compared to 2019, as a result of the weakening of the prices of funds with a high content of sulfur, due to the impact of the regulation of the International Maritime Organization IMO 2020, in which the content in fuels used by ships is restricted from 3.5% to 0.5%.

145,000 tons (Kton) of asphalt were exported in 2020, which represented a 42% growth as compared to the previous year. The main destinations were the United States, Mexico, Bolivia and some Caribbean islands such as the Bahamas and Bermuda.

The first FOB export of asphalt was made to the Gulf of the United States and Puerto Rico for 7.7 Kton in December 2020, fulfilling one of the most relevant milestones which will allow a greater value capture compared to Ex Works sales. 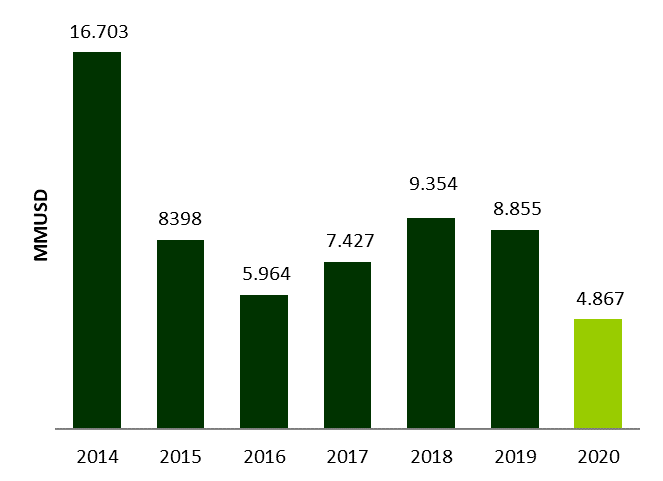 On the other hand, product sales decreased as compared to the previous year (-48.6 kbed), due to the lower demand for fuels and petrochemicals as a result of the preventative isolation measures originated with the arrival of the pandemic.

Imports reached USD $ 1,548 million in 2020, which represented a decrease of 49% as compared to 2019 in line with the lower demand for fuels and the greater purchase of naphtha from Reficar. This reduced the total volume of imports by 30% (-37 kbde), added to a lower purchase price (-28%) in line with the decrease in the Brent price.

The strategy implemented by Ecopetrol in the cost reduction and efficiency improvement program identified that it is important to reduce dilution costs in order to make the heavy crude production projects marketed by Ecopetrol Group viable. Therefore, efforts continued to be focused on increase dilution savings during 2020 through the marketing of Castilla crude at viscosities above 400 centistokes (at 30 °C). Thus, average viscosities of 442 centistokes were reached, allowing for incremental savings due to a lower diluent requirement of USD $ 64 million.

Ecopetrol’s fuel portfolio is mainly made up of gasoline, diesel, jet and marine fuels. The behavior in 2020 of the sales volume for each of these products is presented in table 16.

Behavior of the sale of fuels 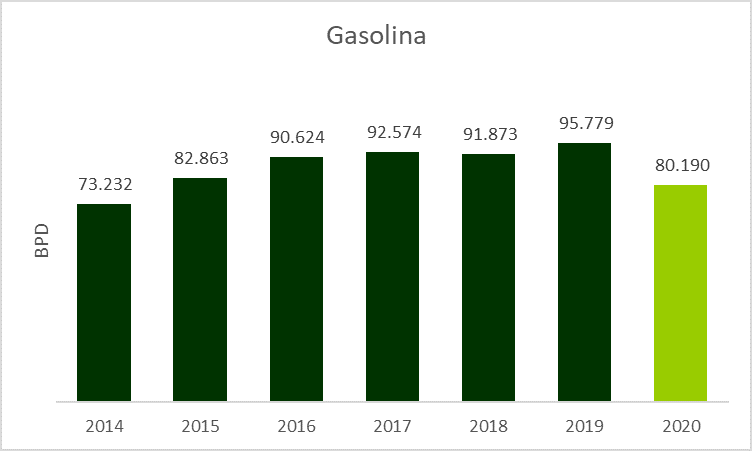 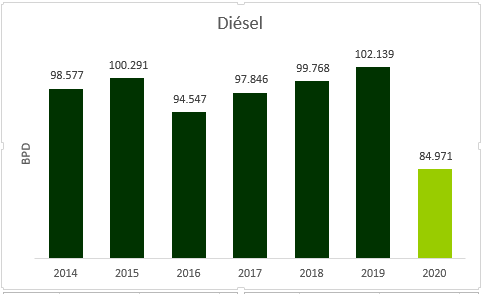 Through international marketing companies, our products reach destinations as far as Ecuador, Peru, Brazil, Venezuela, Argentina, Central America, the Caribbean and the United States in the case of solvents, polyethylene, asphalt and sulfur.

The total income from the sale of petrochemical and industrial products was $ 1 trillion in 2020. This figure represents a 16% decrease as compared to the immediately preceding year, due to a 19% drop in the price.

The commercial function is the last link in the value chain, which connects Ecopetrol with the markets in Colombia and the world, seeking to maximize the addition of value for the Ecopetrol Group through commercial excellence, and supported by human talent and relationship with customers.

Commercial and Marketing is in charge of the following topics:

Responsibility in handling the products

In its work to minimize the risks and impacts associated with the manufacture, use and disposal of products and their effects on people and the environment, Ecopetrol has specific processes and procedures, complies with national regulations and applies the best practices of the international oil industry.

For the handling of liquid fuels, Ecopetrol applies NFPA 30 (National Fire Protection Association), which establishes standards for the design of storage tanks and filler pipes, as well as the applicable technical standards and regulations issued by the Ministry of Mines. and Energía de Colombia.

In the case of petrochemicals and industrials, Ecopetrol takes special precaution because they are volatile products that can cause explosions under certain pressure and temperature conditions; For this reason, they are stored, handled and disposed of in accordance with the technical data sheet of each product and in accordance with the national regulations for the management and disposal of hazardous waste.

For the design, construction and operation of the facilities for the transportation and handling of hydrocarbons, the API, ANSI, ASME, NFPA, DOT and ICONTEC standards are applied, and the regulations issued by the Ministry of Mines and Energy, the Ministry of the Environment, Housing and Territorial Development and the other competent authorities.

The carrier must comply with the requirements established in Decree 1609 of July 31, 2002 or in the regulations that modify, add or substitute it. The transportation activity of liquid fuels derived from petroleum by pipeline will be governed by the transportation regulations issued by the Ministry of Mines and Energy for this purpose. Vessels that transport liquid fuels derived from petroleum that are mobilized by sea or river must carry the single transport guide.

In accordance with current regulations, as it is a public entity of the national order, Ecopetrol must not have a CCITE (Certificate of Lack of Technical Reports on Narcotic Drugs). Nor is it obliged to carry out any control with respect to the agents of the fuel distribution chain registered in SICOM, nor does it correspond to verify the CCITEs of its customers.

Notwithstanding the foregoing, Ecopetrol has implemented actions against said products, such as requesting a deficiency certificate from customers, prior to the signing of a contract or sales order and the periodic verification of the quota reported against the quantities dispatched. . There is also a detailed procedure for the commercialization of controlled chemical substances and products.

In line with the National Action Plan for the Management of Chemical Substances in Colombia (2013-2020) established by the Ministry of Environment and Sustainable Development (MADS), during 2020 Ecopetrol continued with the implementation of the Globally Harmonized System of Classification and Labeling of Chemical Products (SGA).

The development of the Technical Guide for the definition of specific requirements for the acquisition of chemical products at Ecopetrol also continued, in which a transition period of one year was established for suppliers to deliver the chemical products with the safety sheets and labeled based on the GHS.

Claims for violation of privacy and leakage of customer data

In 2020 there were no complaints about violation of privacy and leakage of customer data.