With more than 50,000 registered species and nearly 31 million hectares protected, equivalent to 15% of the national territory, our country ranks second worldwide in biodiversity. The following information and figures; have been consolidated based on taxonomic reclassifications and reports from the Von Humboldt Institute:

Biodiversity in the world 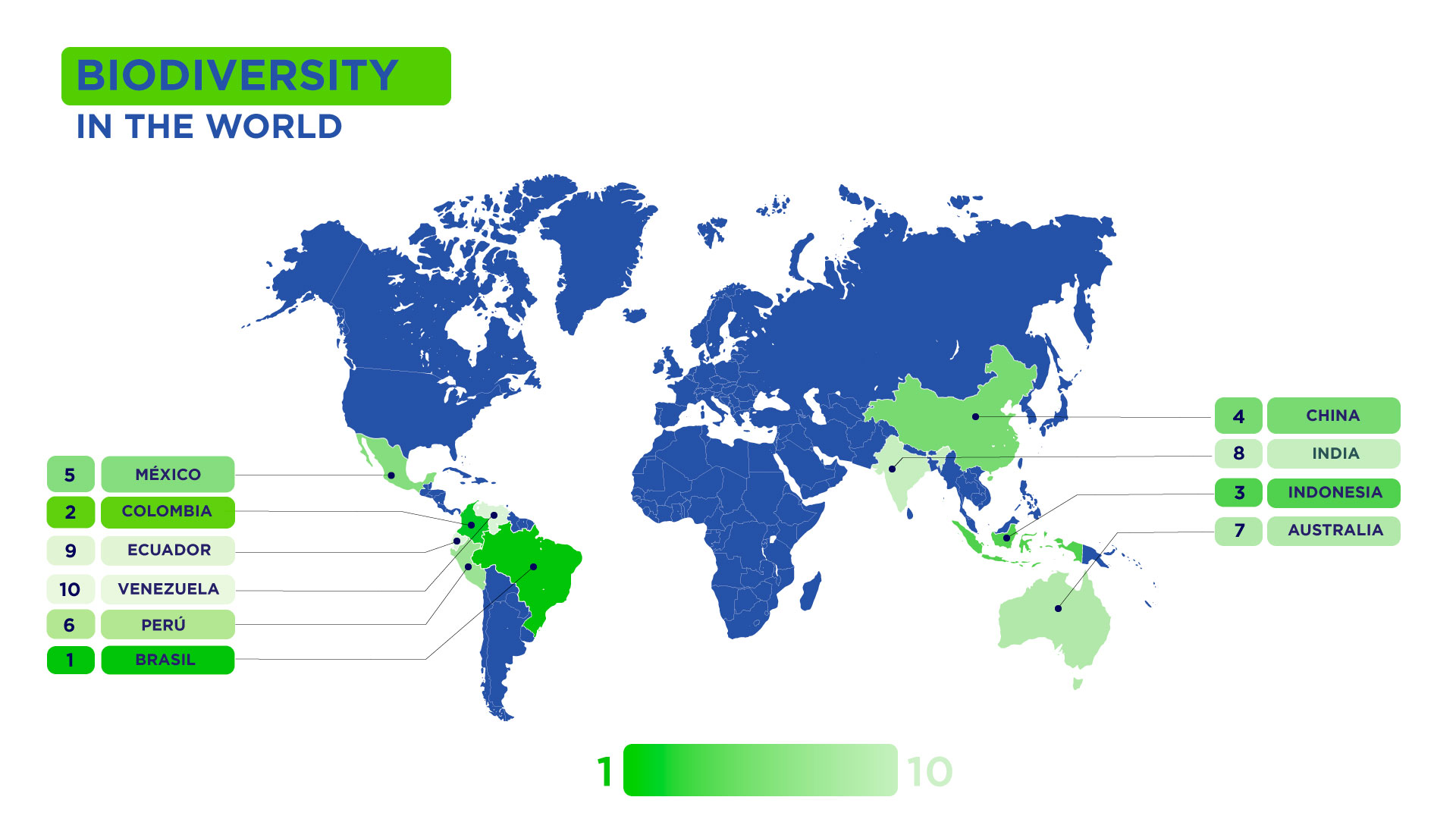 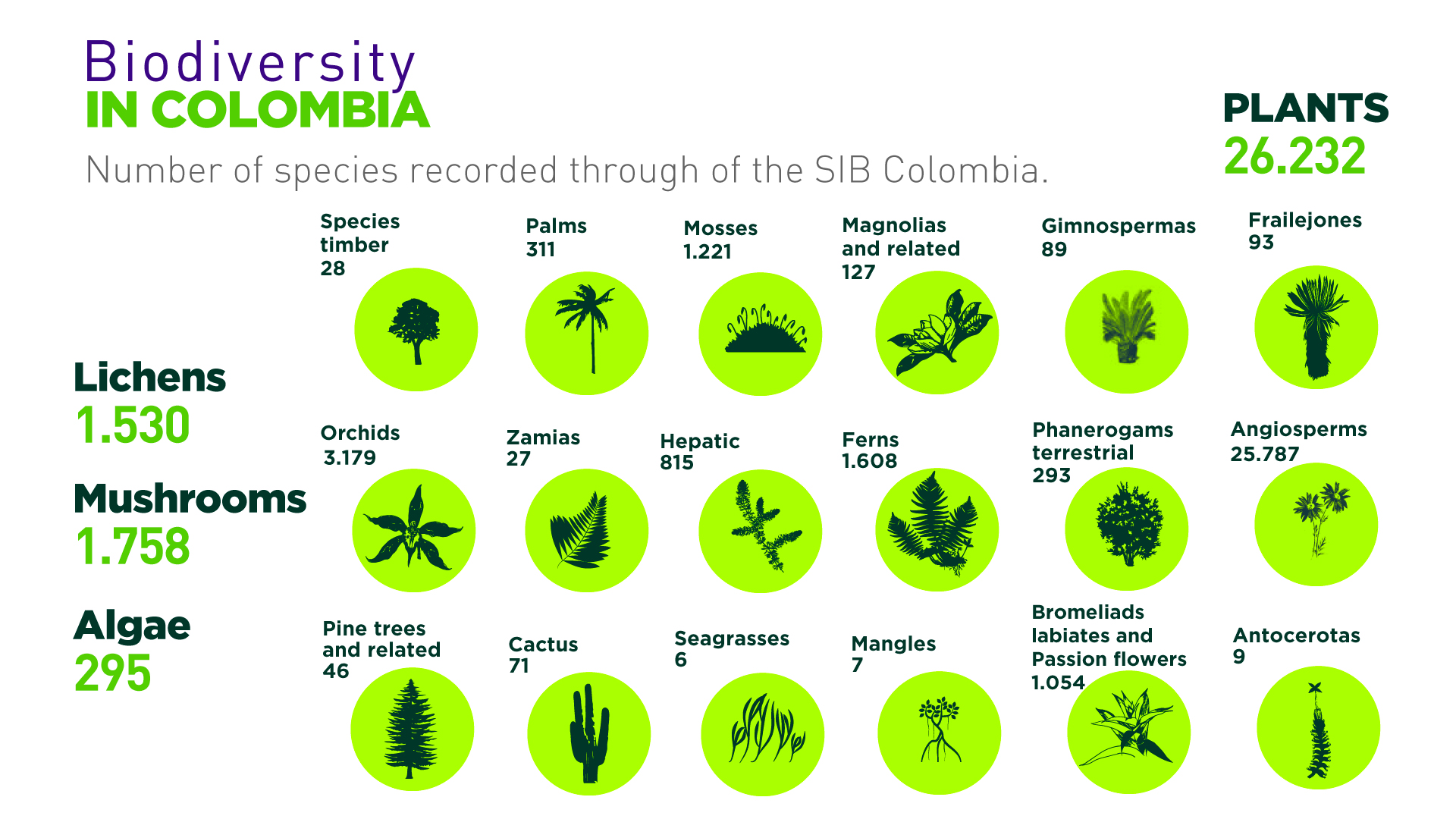 Colombia is a country recognized as a megadiverse territory where complexity, fragility and biological diversity are interwoven with a history and a dynamic and complex social, economic and political present, which influence ecosystems to confront at least 5 major drivers of loss to biodiversity, which are described below (Center for Sustainable Development Goals for Latin America, 2019):

In order to minimize these impacts, the company carries out biodiversity and ecosystem service management processes aimed at generating the least amount and magnitude of residual impacts, based on the implementation of the mitigation hierarchy. 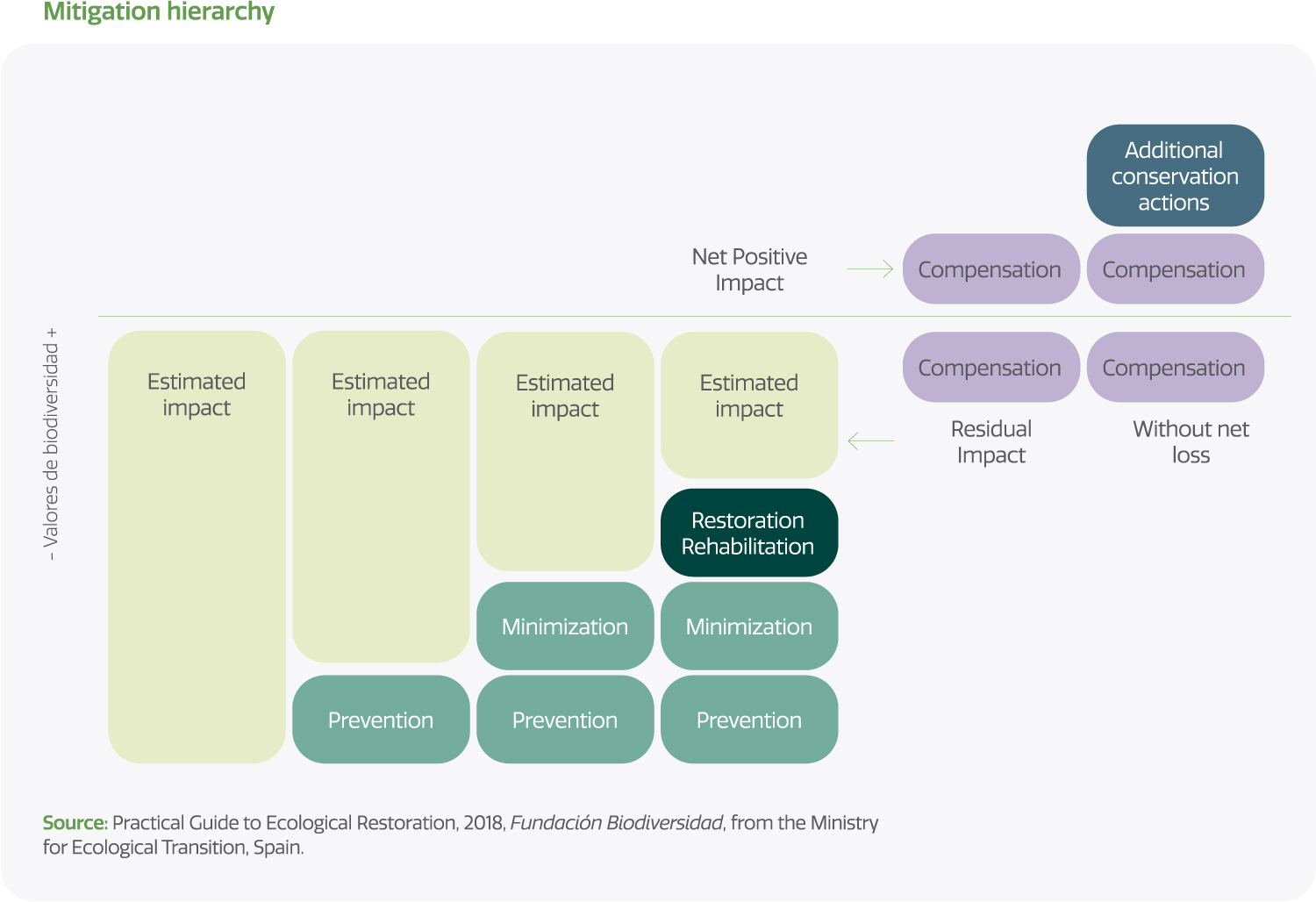 This hierarchy refers to the sequence of measures designed to manage the negative impacts of a project, work or activities, in search of a non-net loss of biodiversity and must be applied for decision-making in its planning and design. 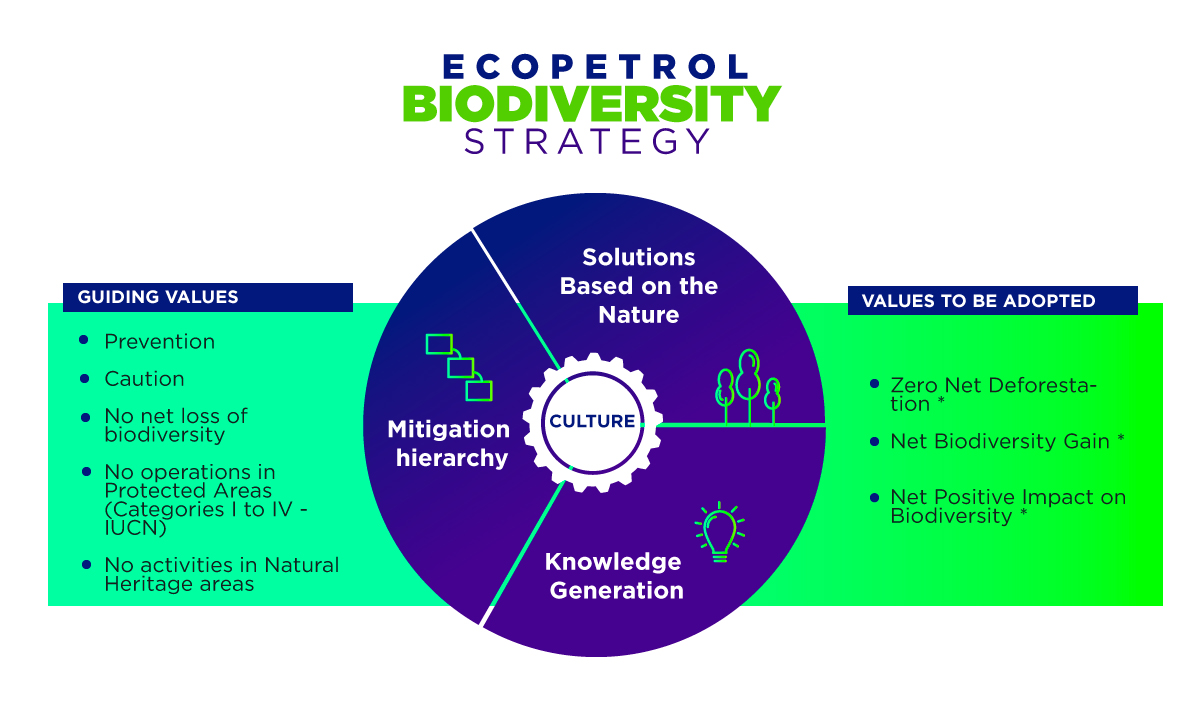 With the adoption of the biodiversity strategy from Ecopetrol we seek to generate a positive impact, meet stakeholder expectations, avoid redesign costs and project delays, maintain the license to operate and gain access to new business opportunities, through the management of biodiversity and ecosystem services. Our strategy is based on four axes: 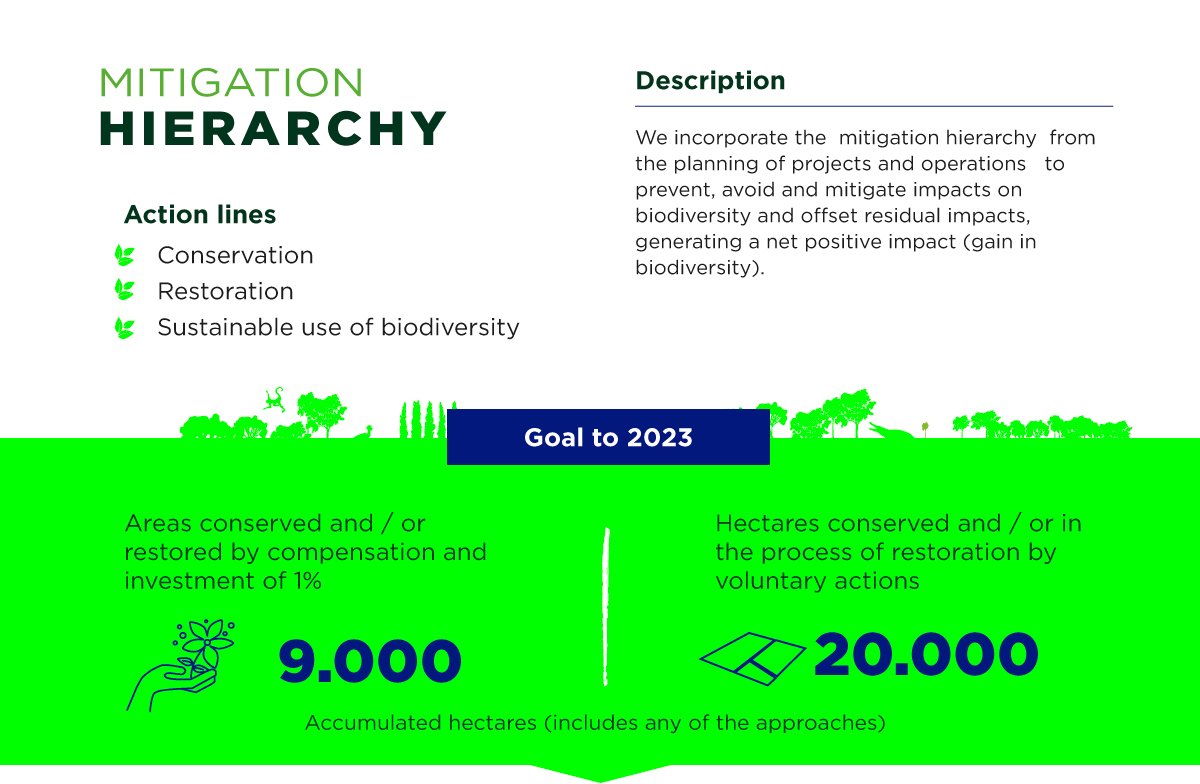 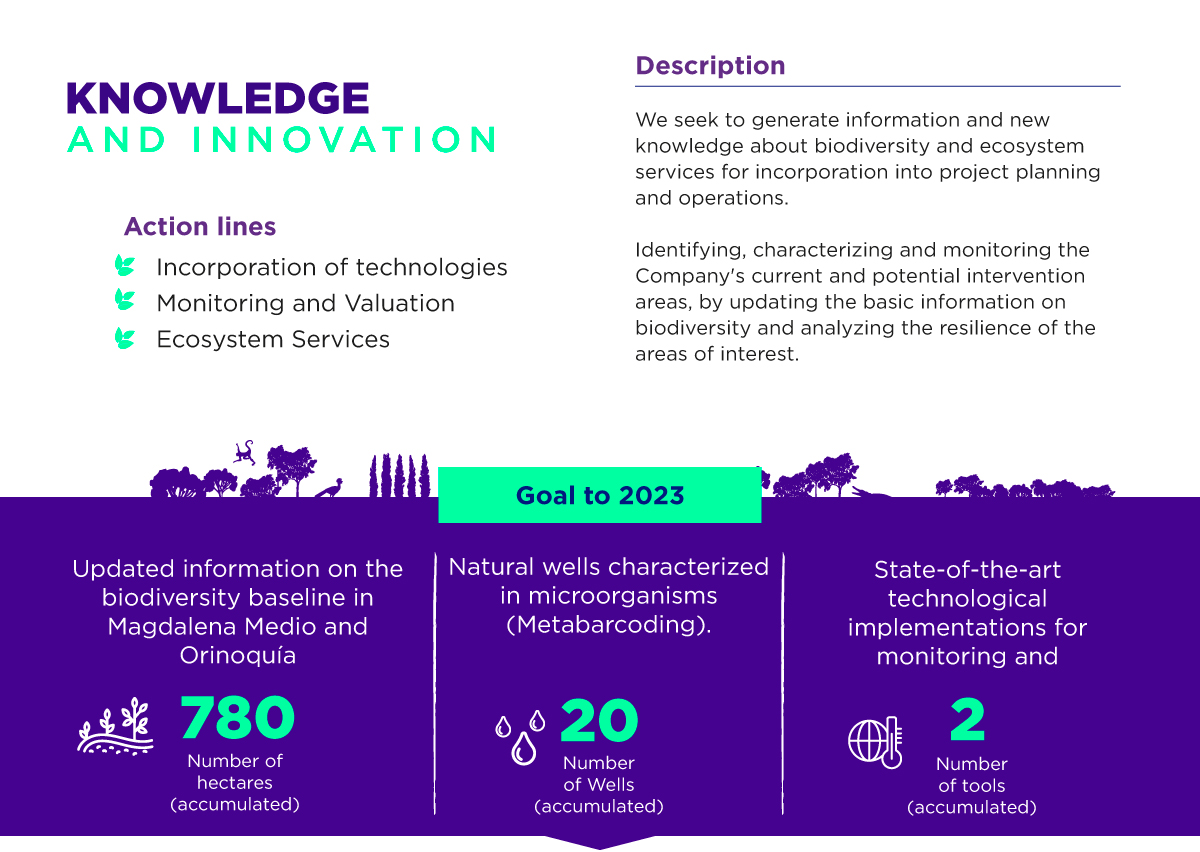 Prevention and mitigation of impacts on biodiversity

Ecopetrol S.A. declares that it does not have, nor does it plan to intervene with exploration, production or refining activities in areas of great value for biodiversity classified according to the International Union for Conservation of Nature-IUCN in categories I to IV, consolidated in Figure 3.

Similarly, Ecopetrol does not have projects or operations in areas declared a World Heritage Site by UNESCO, nor does it plan to intervene in these types of areas. Areas of great value for biodiversity, categories according to IUCN categories I to IV. 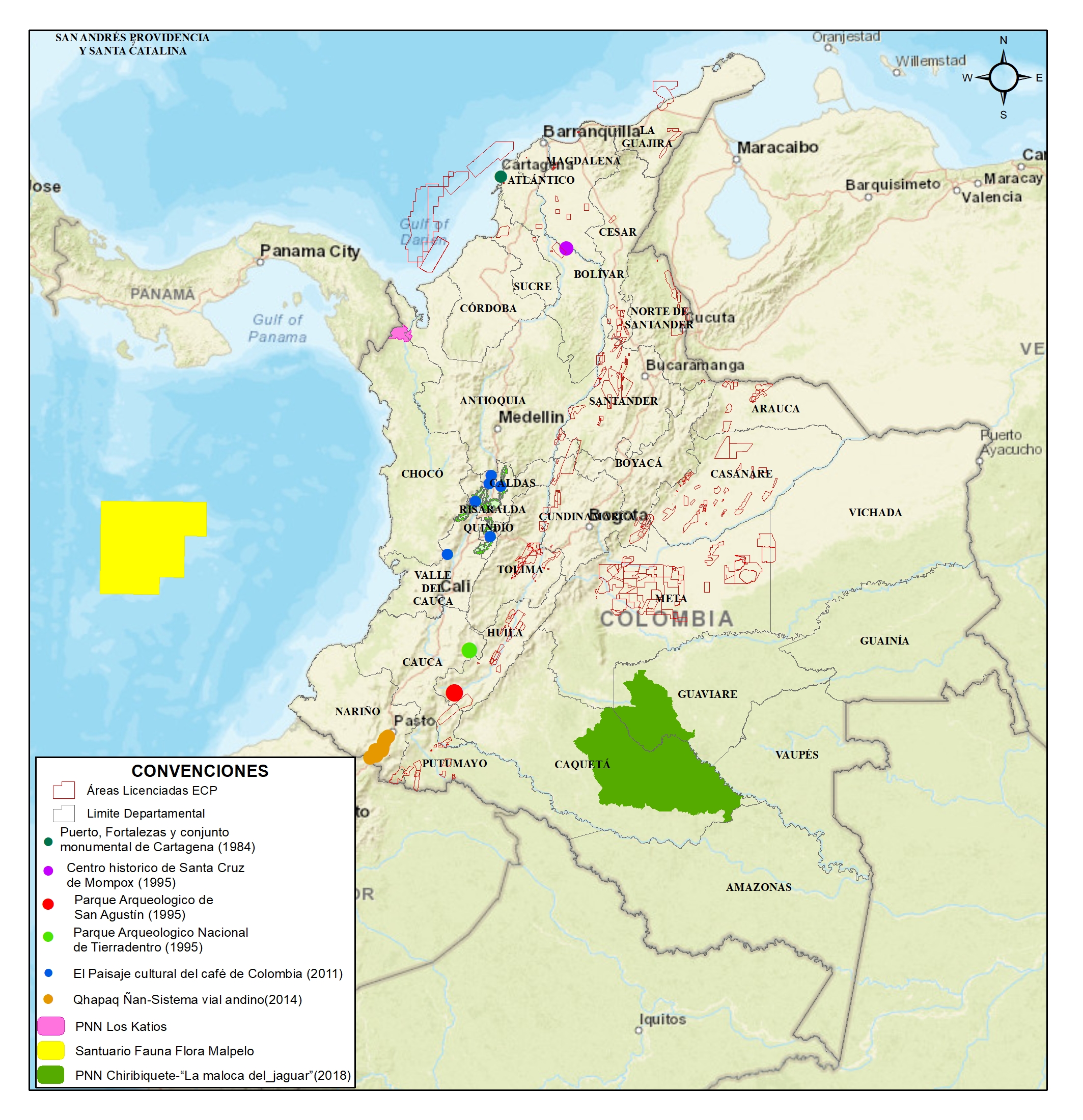 Achievements in biodiversity management 2017 to 2020

* The accumulated data corresponds only to the last year of the validity, since this includes the initiatives of previous years.

Commitments to the management of biodiversity and ecosystem services 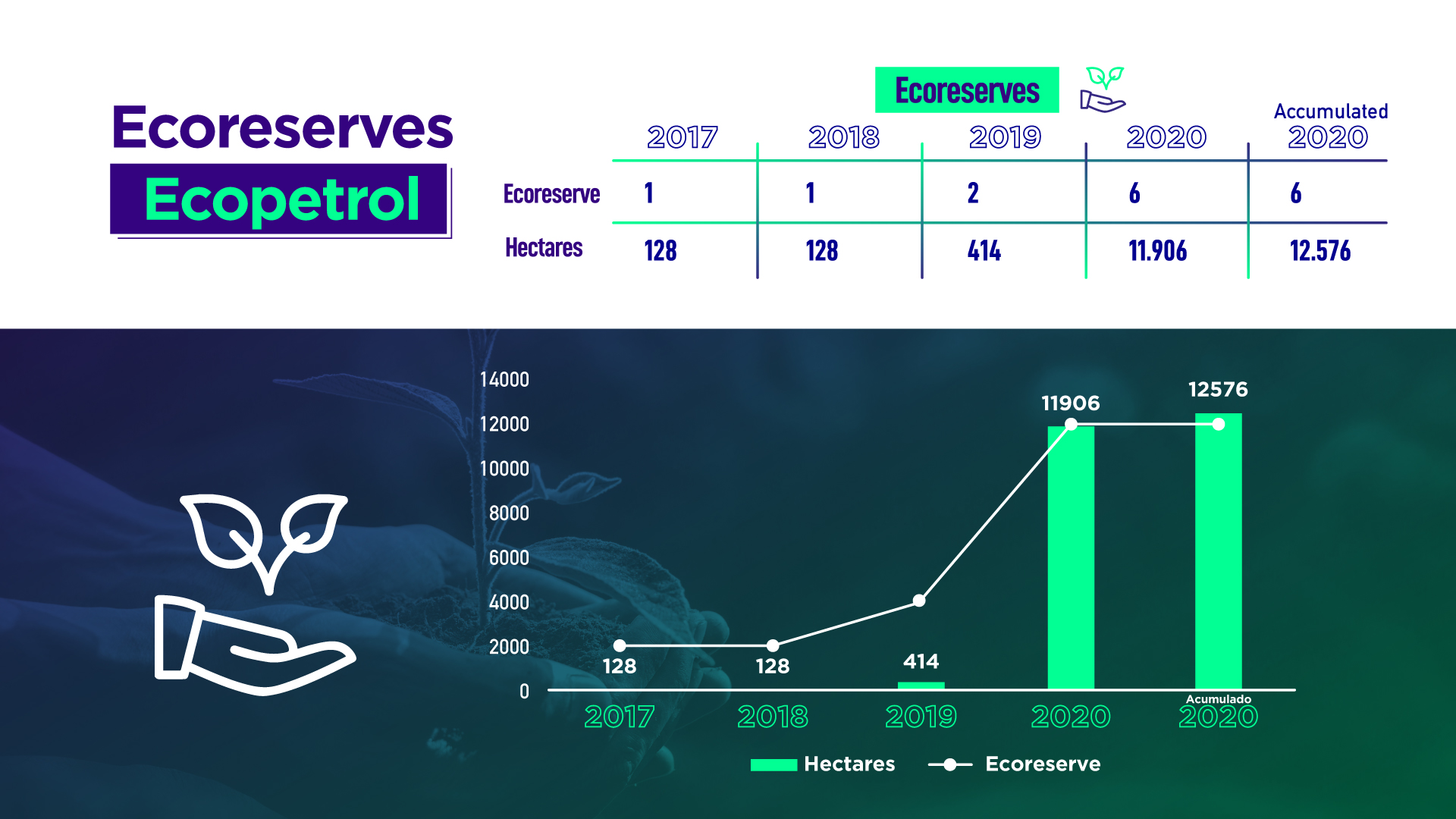 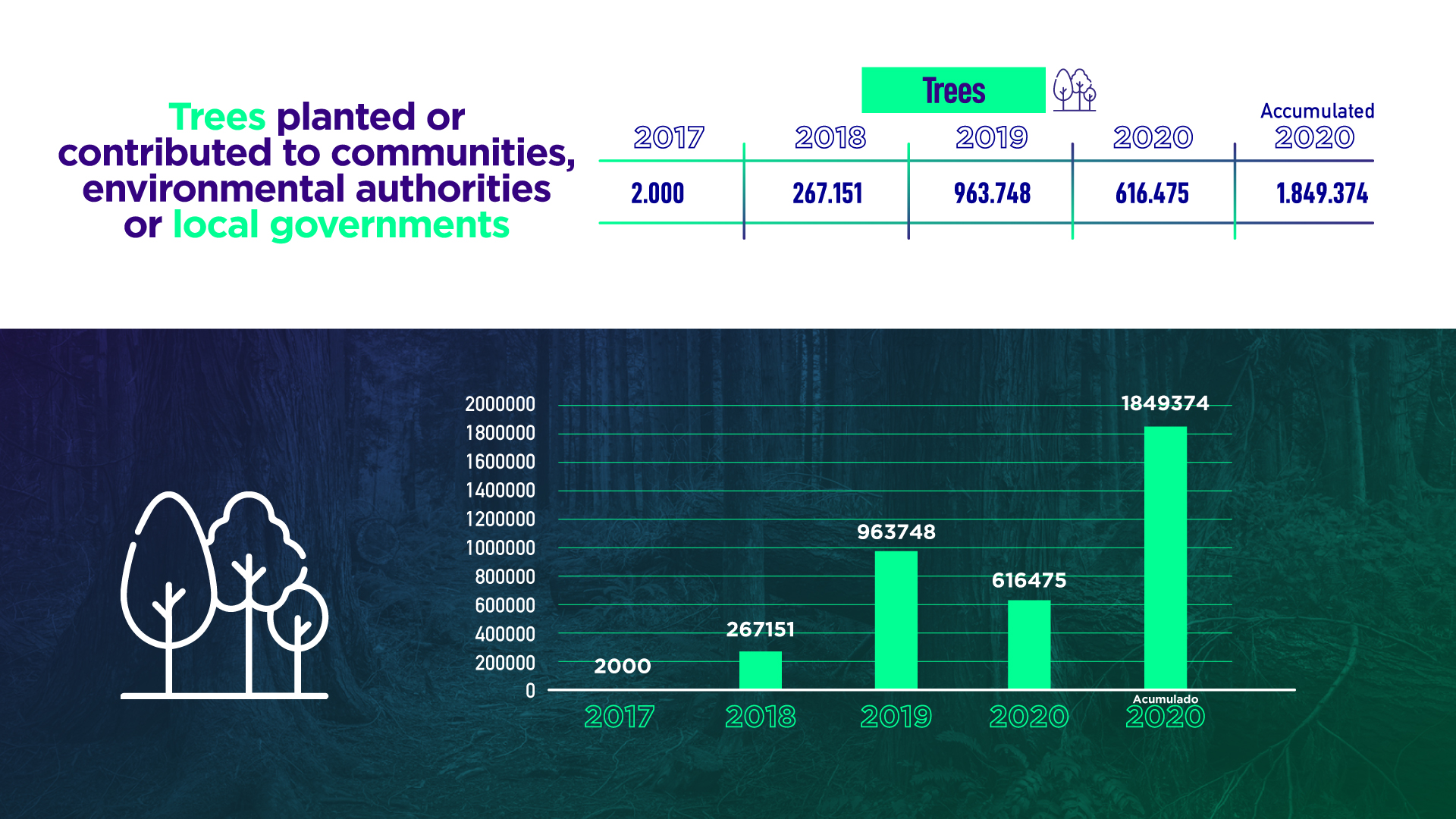 The trend of the results and the new goals proposed show the commitment of Ecopetrol S.A. with the comprehensive management of biodiversity and ecosystem services.

Strategic alliances for the management of Biodiversity and Ecosystem Services.

Regarding voluntary initiatives, Ecopetrol during 2020 continued with the execution of the agreements:

The Vida Silvestre-PVS Project is an initiative for the conservation of biodiversity financed by Ecopetrol that began in 2013, with the Wildlife Conservation Society (WCS) as an ally, with the support of the Mario Santo Domingo Foundation, the Action for Action Fund Environment and Children, and local allied organizations that lead actions in the work landscapes.

In 2020 the initiative was recognized by the Ministry of Mines and Energy with the first place in the program "Significant Experiences in Environmental and Social Management of the Mining and Energy Sector”. 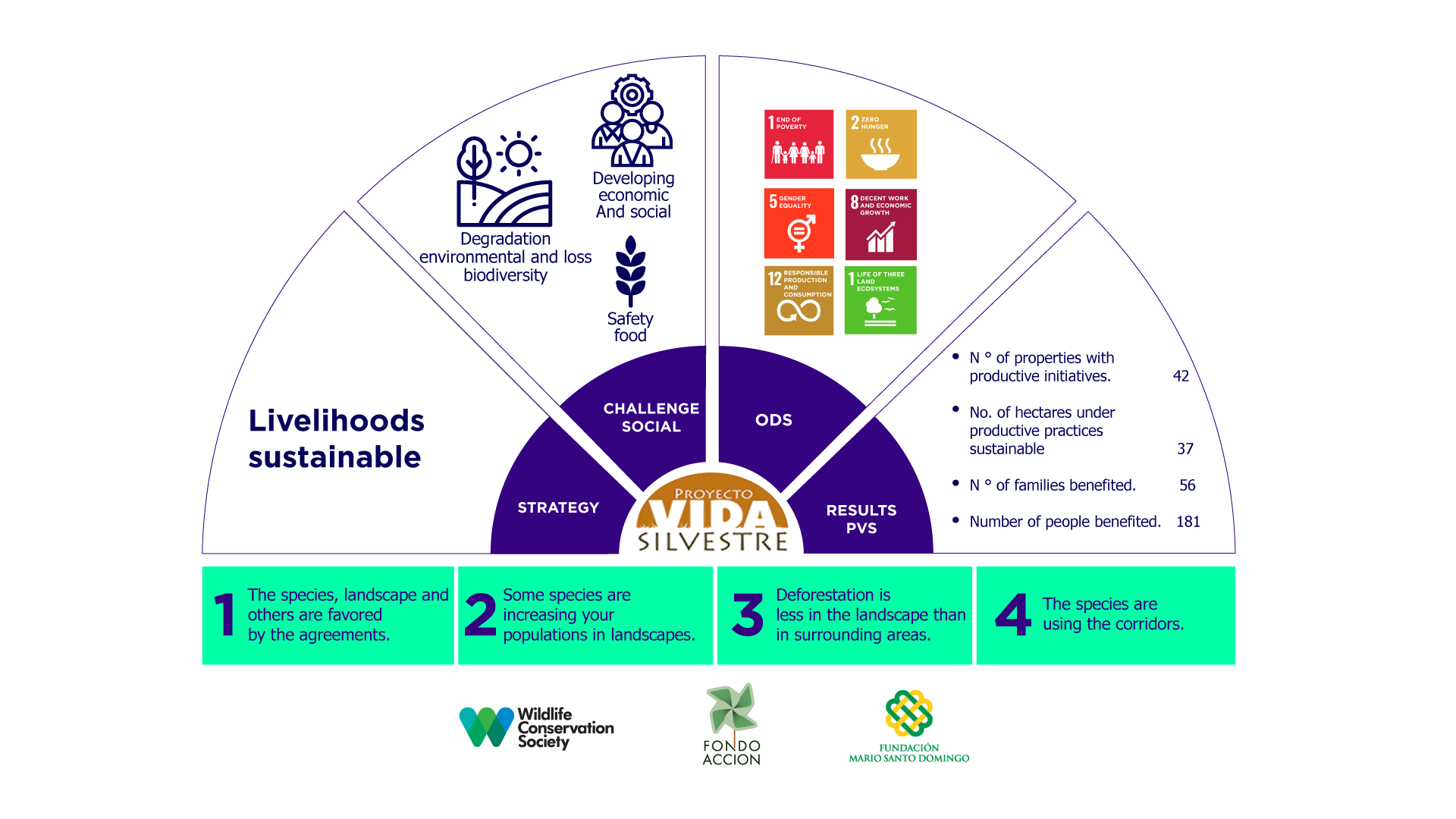 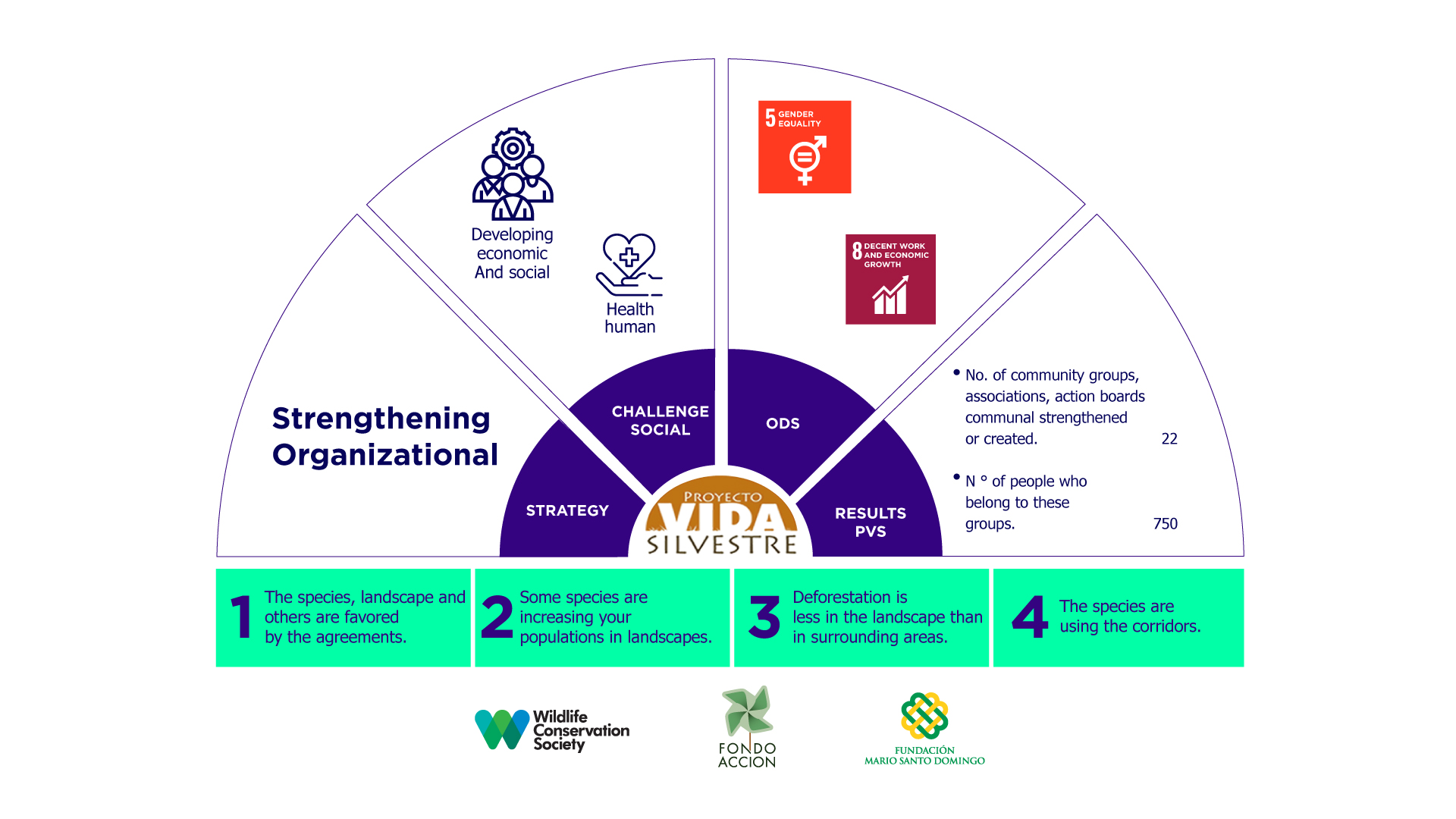 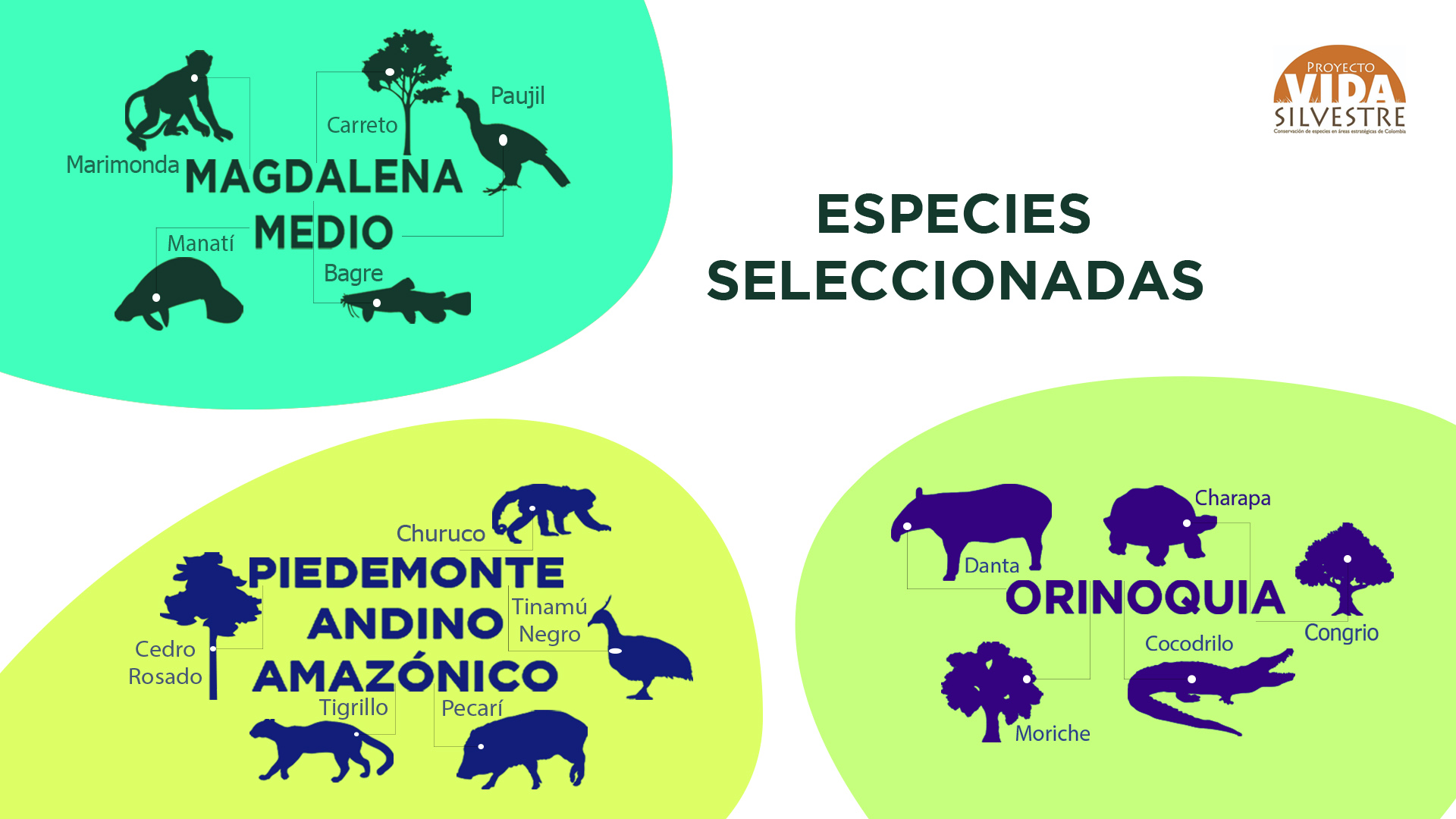 Main advances and achievements of the Wildlife Project.

Learn more about the Wildlife project by clicking here

As part of the agreement between Ecopetrol and the Alexander Von Humboldt Institute, the Ecoreservas Network strategy has been consolidated, which corresponds to a Complementary Conservation Strategies (ECC), in which the properties that had a high contribution to conservation were identified. of biodiversity and ecosystem services.

Ecoreserves are defined as geographically delimited areas owned by Ecopetrol that are voluntarily used in part or in full for the conservation of biodiversity and the supply of ecosystem services, without limiting their productive and exploratory vocation.

The benefits of Ecoreservas are:

The Ecoreservas network is made up of Ecopetrol properties that together make up the Ecoreservas. During 2020, six pilot areas were included, with more than 11,000 hectares. 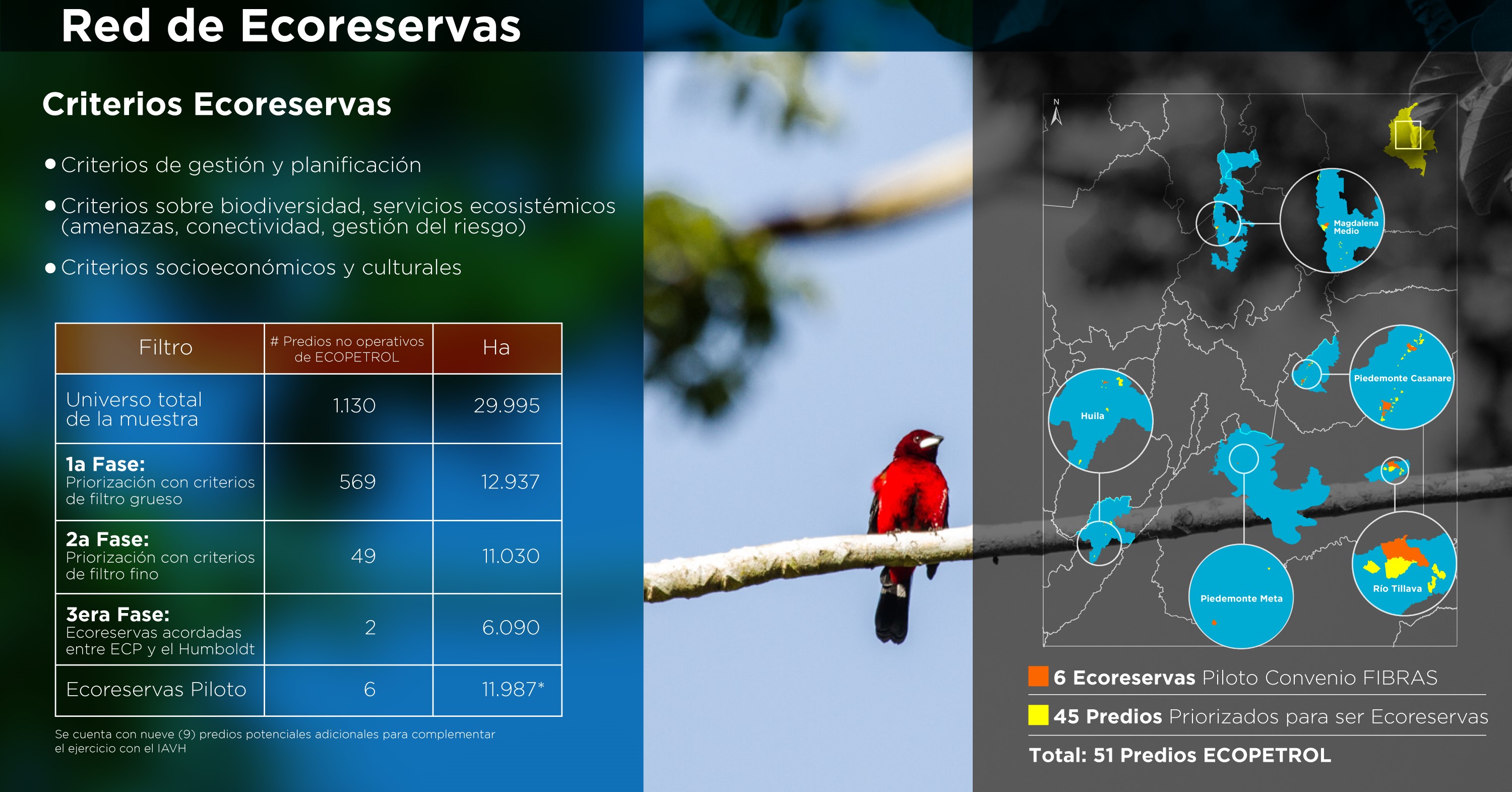 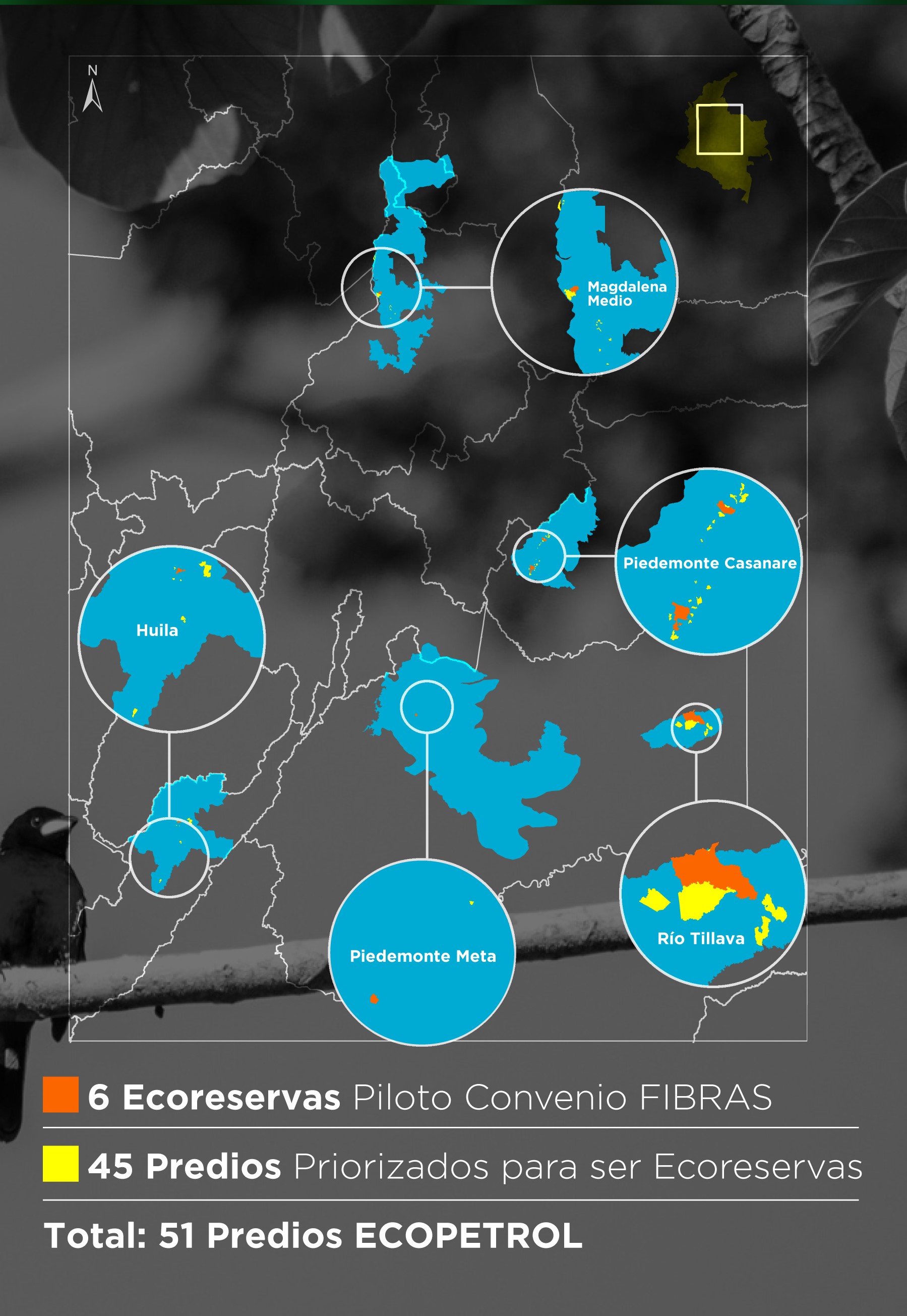 The future goals of this Ecoreservas plan include the establishment of 50 Ecoreservas throughout the Ecopetrol Business Group.

know about these and other details of this project by clicking here. aquí.

Main advances and achievements of the Agreement with the Alexander von Humboldt Institute.

Ecopetrol SA is part of the initiative "Biodiversity and Development for Putumayo" led by ANDI, which seeks to contribute to the comprehensive management of the country's biodiversity, through collective work, investment and compensation schemes between companies, institutions and local groups, with a territorial development approach.

Main advances and achievements of the ANDI Agreement 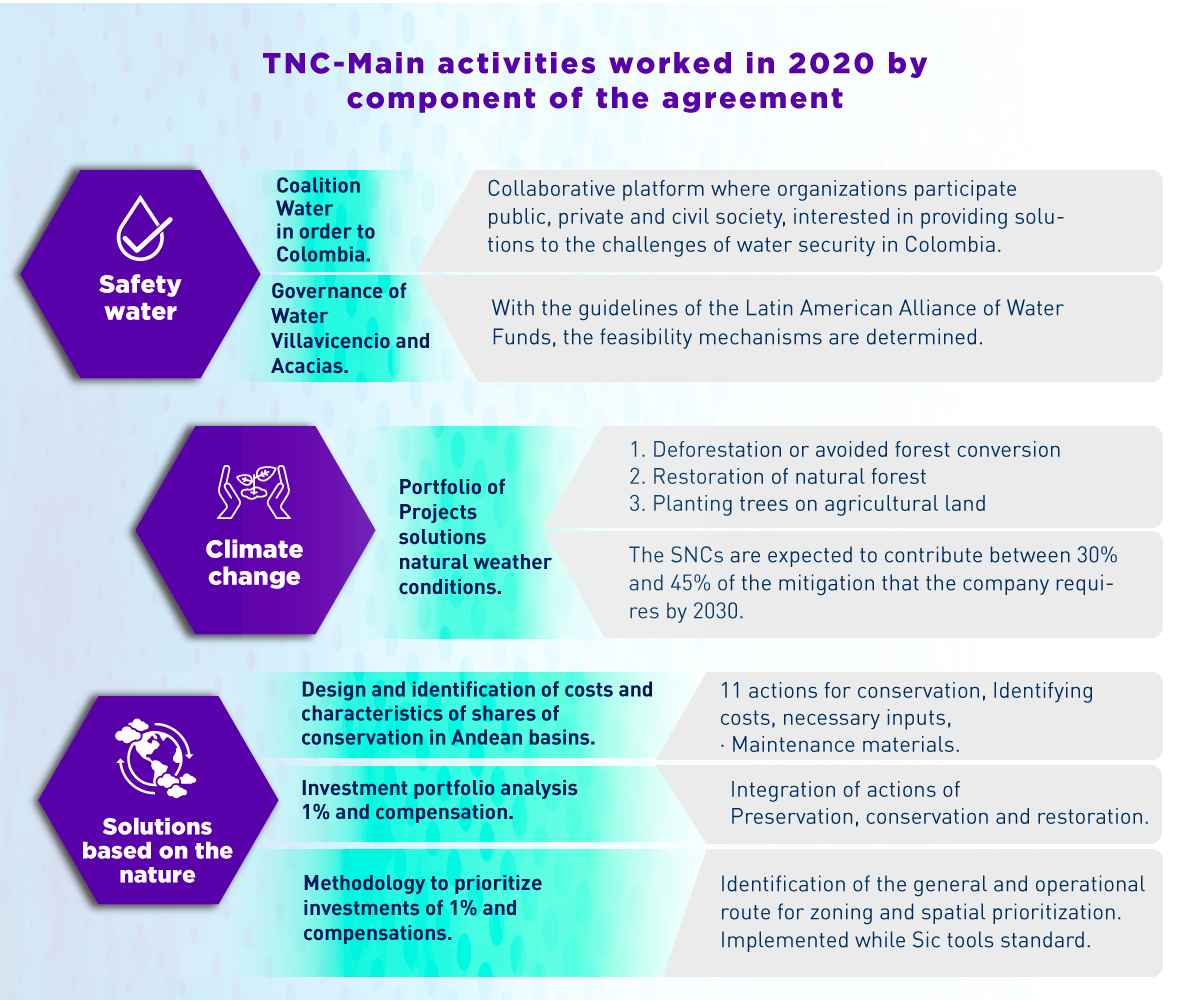 Operations in areas of great value for biodiversity

As a result of the incorporation of biodiversity in the planning of projects and operations, Ecopetrol does not have operations in areas of great value for biodiversity in categories I to IV of IUCN protected areas or in areas declared World Heritage by UNESCO

In its direct operation, Ecopetrol has four (4) production facilities in two Regional Districts of Integrated Management (DRMI) located in the department of Santander. These DRMIs were declared between the years 2005 and 2006, after the start of the industry operations in the area, which took place in 1951. On average, the percentage of the area of operation in the zones of exclusion from the areas of management is 9.12%, with the highest values found in the DRMI San Silvestre in the municipality of Barrancabermeja.

The nature of the significant impacts on biodiversity that Ecopetrol made during 2020 is associated with the transformation of the habitat. A total of 359 ha were intervened and 1,657 m3 of forest use were intervened, these interventions are subject to environmental compensation through the implementation of conservation or restoration projects through the actions, modes, mechanisms, quantities and forms enabled in each environmental management instrument.

By 2020, 6.8 km of water bodies were affected, 0.1365 km2 of land, all these impacts are reversible. Ecopetrol in each of the reported cases, activated the emergency and contingency plan which is filed with ANLA, implementing the incident command system, and following the procedures and protocols established for the care of environmental emergencies. 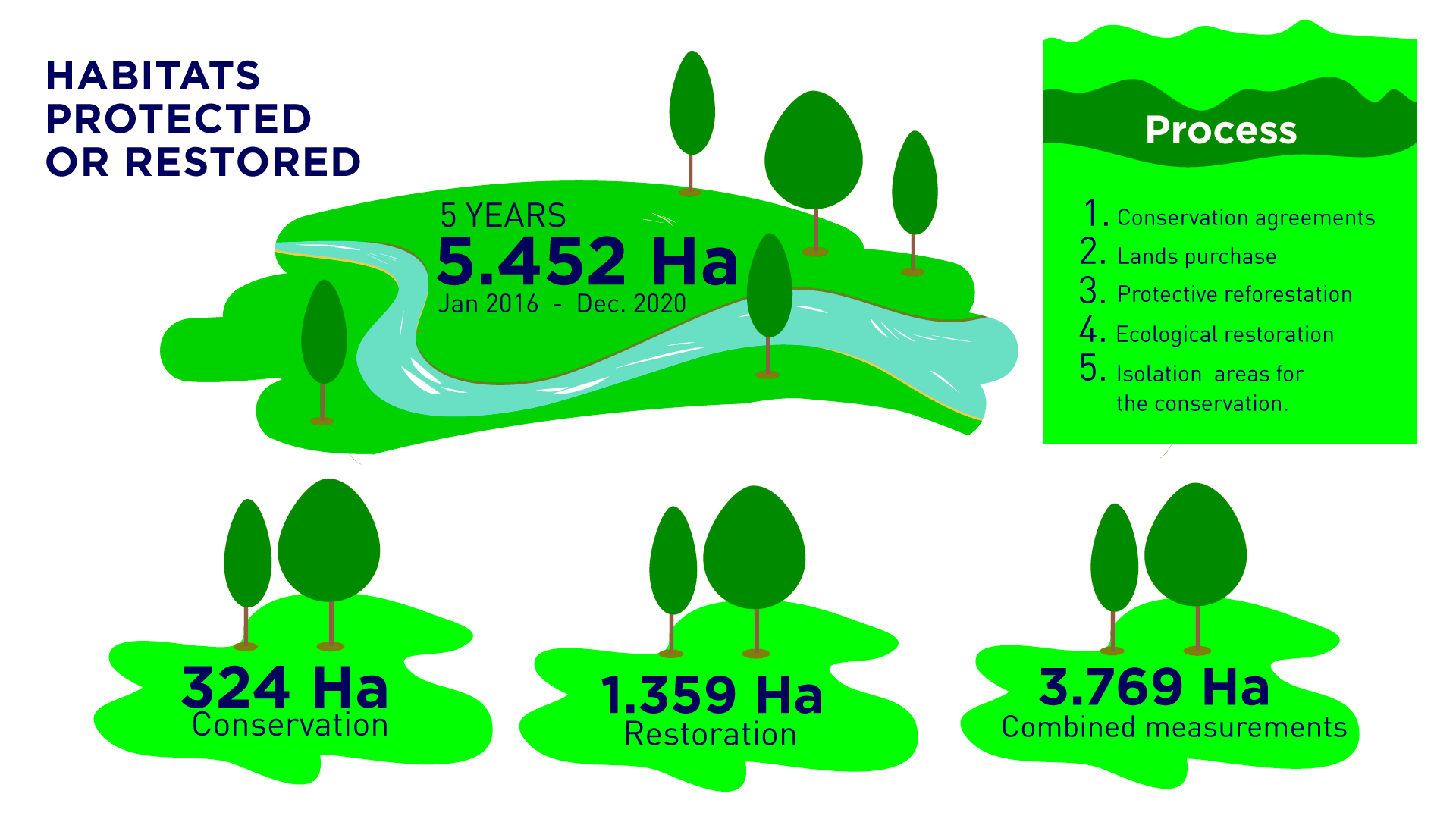 The methodology implemented for the restoration of habitats corresponds to the establishment of protective reforestation in areas of protection of water sources located in the area of direct influence of the projects, in order to compensate for changes in land use and atmospheric emissions of the operation.

Additionally, Ecopetrol and its business group have publicly declared their commitment to the conservation of strategic ecosystems in the country from the generation of a network of Ecoreserves, which began with La Tribuna in the department of Huila 26 years ago ( https://nuevoportal.ecopetrol.com.co/latribuna ) and that since 2020 add up to five additional areas in the departments of Santander, Meta and Casanare. The Ecoreservas Network is proposed as a complementary conservation strategy to those already established by the State, understanding Ecoreserva as: A geographically delimited area, owned by Ecopetrol, which is voluntarily destined in part or completely to the conservation of biodiversity and the offer of ecosystem services, without limiting its productive and exploratory vocation.

Finally, Ecopetrol joined the National Government's #SembrarNosUne initiative that seeks to restore degraded ecosystems from the planting of 180 million trees throughout the Colombian territory. The Business Group, committed to the planting and delivery of 6 million trees between 2018 and 2022 (https://idm.presidencia.gov.co/prensa/ecopetrol-y-epm-sembraran-18-millones-de-arboles-en-el-proposito-nacional-201112; https://www.larepublica.co/economia/ecopetrol-se-une-a-la-iniciativa-del-gobierno-sembrar-nos-une-con-seis-millones-de-arboles-3072953).

Progress in the recovery of the Lisama Well 158 contingency

In order to continue with the recovery of the Lisama 158 Well contingency that took place in 2018, properties for an area of 4.13 hectares were acquired, which are intended to contribute to the process of environmental recovery of the affected area.

For the implementation of the activities corresponding to the process of achieving the areas for the rehabilitation of riparian vegetation and flood plains associated with bodies of water & nbsp; From the Lisama stream, La Muerte channel and its contributors, activities are carried out focused on the formalization of voluntary conservation agreements with private owners.