Description and Responsibilities of the Internal Audit Direction

The Internal Audit Department at Ecopetrol S.A. is responsible for assisting the Audit Committee of the Board of Directors on the performance of the internal control that supports the development of the operations of the Administration, through permanent monitoring by means of assurance and advisory practices, in search of continuous improvement and the generation of value focused on the achievement of the strategic objectives and the strengthening of the management and the Internal Control System, through an integral audit process, evaluating with objectivity and independence the business management.

Some of the main responsibilities of the internal audit function are described below: 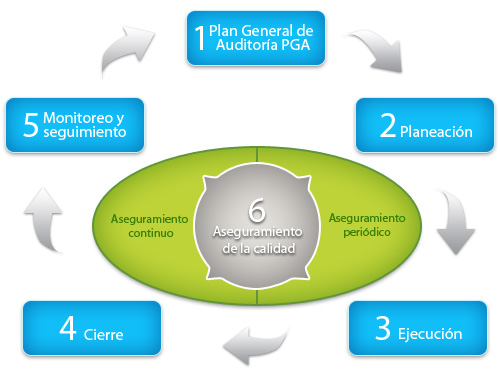 The Internal Audit Department has been structured with an organizational design and a world-class operating model to respond to the major changes and challenges established by Ecopetrol S.A., through the introduction of international auditing standards, implementation of its Quality Management System, development of human talent and adoption of best management practices.

Preserving its objectivity and independence, the Internal Audit Department reports functionally to the Audit Committee of the Board of Directors and administratively to the Presidency of Ecopetrol S.A.

Statutory Auditor: (Control of legal origin because Ecopetrol S.A. is a Mixed Economy Company, of a commercial nature, organized as a corporation). Ecopetrol S.A. has a Statutory Auditor and his respective alternate, both elected by the General Shareholders' Meeting for the same term as the Board of Directors.

Ecopetrol S.A. has a Statutory Auditor with his respective alternate, both elected by the General Shareholders' Meeting for the same period as the Board of Directors.

On a permanent basis, the management will keep the latest report of the Statutory Auditor, together with its annexes and the detail of the findings and qualifications presented, permanently available to the market and the shareholders, on Ecopetrol S.A.'s web page www.ecopetrol.com.co or the one that takes its place, at the disposal of the market and the shareholders.