Water is a vital resource for the development of Ecopetrol’s operations, as well as for the communities in the areas where it carries out its operations. Based on this, Ecopetrol’s comprehensive water management aims to incorporate efficient water management into its value chain, as an enabler of projects and operations, seeking the sustainability of the company, reducing environmental impacts and conflicts associated with water and water security in the environment.

This management is materialized through thematic lines – in accordance with the National Policy on Water Resources, the National Development Plan, the Green Growth Mission and the Sustainable Development Goals.

Through this strategic theme, it seeks to carry out the comprehensive management of water in businesses, in order to generate value through the qualification of production and reserves, as well as to guarantee the availability and continuity of the current and future supply of the liquid for the projects and operations, considering the sustainability of the water resource.

The information associated with the operational component of comprehensive water management in Ecopetrol is consolidated in the Water Information System (SIGAR-Aguas), implemented on the SAP Environmental Compliance (SAP EC) technological tool, based on the records measured in each one of the facilities. The data reported in this chapter includes all of Ecopetrol’s direct operating segments, as well as the Cartagena Refinery, CENIT Transportation Stations and ODC Pipeline, administrative buildings, local attention centers and Ecopetrol health centers. On the other hand, 2019 data is updated based on the final consolidated data for the entire reporting period.

In 2020, the total volume of water required to develop Ecopetrol’s value chain activities was 147.6 million cubic meters (m3). 65% of this volume (96.5 million m3) comes from the reuse of effluents and only 35% (51 million m3) was captured from natural sources and purchased from aqueducts. As can be seen in graph 69 below, the percentage of reuse as compared to the total water required to operate has been increasing each year, going from 56% in 2016 to 65% in 2020, which has allowed a sustained reduction in fresh water collection in recent years, despite higher water requirements to operate. Fresh water withdrawals have decreased by 8.7% with respect to 2016. 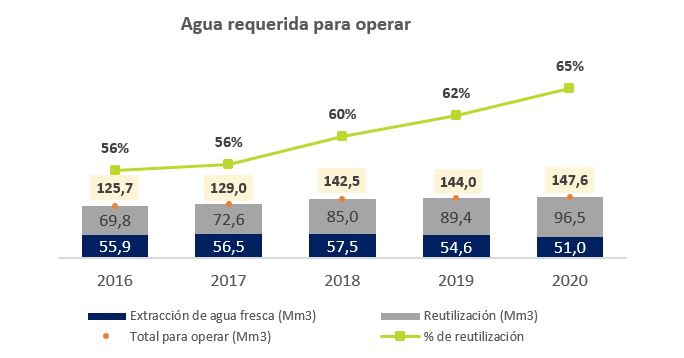 51 million m3 of fresh water from natural sources and aqueducts were captured, during 2020 – which represents a 7% decrease as compared to the volume captured in 2019, mainly due to reductions in the Barrancabermeja and Cartagena refineries associated with lower loads of crude due to the pandemic. On the other hand, the use of water collected in the La Cira Infantas, San Francisco, and Yaguará production fields for recovery processes was reduced. The use of collected water for recovery was eliminated in the last two.

68% of the total water collected was extracted from 40 surface points such as rivers, streams, swamps and sewers, 18% corresponds to underground water extracted from 82 authorized points; and the remaining 14% was acquired from 27 aqueduct delivery points and external suppliers that have approved the sale of water for domestic and industrial use. 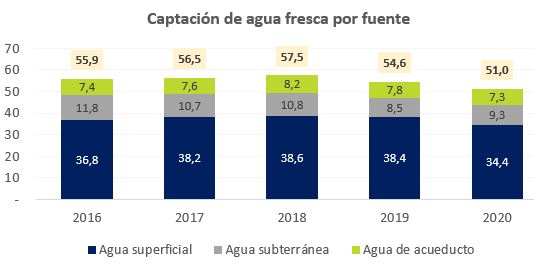 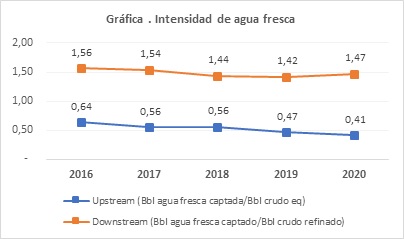 53.63% of the volume of fresh water captured was used in the refining and petrochemical processes (Downstream), followed by development and production processes (Upstream), where 26.29% of the total volume captured was used; 19.54%, equivalent to 9.98 million m3, was supplied for the supply of communities located mainly in the El Centro district, in Barrancabermeja - Santander, and the remaining percentage was used for exploration (0, 01%) and transportation (0.4%) processes and corporate administrative areas (0.13%). The graph (intensity of fresh water) shows the intensity of fresh water extraction for the processes with the highest demand (refining and production) during the last 5 years. The graph shows a 13% decrease in the intensity of the production segment as compared to the previous year thanks to the reductions mentioned in the La Cira Infantas, San Francisco and Yaguará fields. In turn, the intensity of the downstream segment showed a slight increase of 3% as compared to the previous year.

Ecopetrol is committed to the reuse of water as a strategy to reduce the volumes of fresh water collection and discharges.  For this reason, initiatives have been implemented to increase water reuse and recirculation levels at facilities. 96.5 million m3 of water were reused in 2020 – equivalent to 65% of the total required to operate, which means that Ecopetrol avoided the capture and dumping of this volume. This figure represents an 8% increase as compared to 2019.

The types of reuse carried out at Ecopetrol are explained below:

The total volume of effluents generated by Ecopetrol’s operations during 2020 was 432.3 million m3, which include: 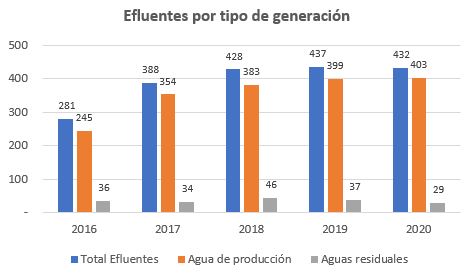 The graph below presents different alternatives Ecopetrol has established for effluent management:

Reuse is the first alternative considered for effluent management at Ecopetrol. As mentioned above, 96.5 million cubic meters of water were reused during 2020, i.e. 22.3% of total effluents. This means that Ecopetrol stopped capturing and pouring this same volume. (See section “Reuse of water”).

Reuse is another alternative for wastewater management, under Colombian environmental regulations. During 2020, Ecopetrol reused 3.1 million m3 of treated production water from the Castilla field, for the irrigation of forest crops in the Agroenergetic Sustainability Area (ASA). This value means an increase of 170% with respect to the volume reused in 2019, and is equivalent to 0.7% of the total effluents (0.8% of the total production water generated throughout the country).

Ecopetrol has discharge points authorized by the competent environmental authorities, who determine the flow, quality and temporality conditions so that the discharge does not affect the natural characteristics of the receiving bodies. In this sense, the company treats 100% of the effluents before their discharge, thereby adjusting their quality to comply with the provisions of environmental regulations and what is specifically required in each permit.

Before disposing of wastewater in surface water bodies, marine waters or the ground, wastewater is subjected to treatments in order to remove the concentrations of substances of environmental interest and comply with the maximum permissible limits established in Colombian regulations. Each discharge has a permit issued by the competent environmental authorities, which is granted after an environmental assessment process in which, it is ensured that the receiving body has the capacity to assimilate discharge through field monitoring and water quality modeling, to not affect the water resource downstream of the mixing zone of the discharge.

It is important to mention that Colombian regulations require compliance with certain substances that are representative for each segment of the hydrocarbon industry. For example, production waters can naturally contain high levels of dissolved salts (e.g. chlorides and sulfates), aromatic organic compounds (such as phenols, BTEX, PAH), some heavy metals, and high temperatures. In turn, wastewater from the downstream segment depends on the process that generates it and can present aromatic organic compounds (such as phenols, BTEX), organic matter (COD, BOD5), total nitrogen and dissolved salts. All these substances are part of the quality criteria that must be met by Ecopetrol in order to carry out the discharges.

Ecopetrol pays special attention due to the level of danger to aromatic organic compounds such as BTEX (Benzene, Toluene, ethylbenzene and xylene), Phenols (such as phenol, chlorophenols, nitrophenols) and PAHs (such as naphthalene, anthracene, benzo (a) pyrene, etc..). Some of these substances such as benzene, benzo (a) pyrene and pentachlorophenol have been classified by the WHO as carcinogenic to humans. To ensure that these substances are not discharged into the environment, Ecopetrol performs a complete treatment of its wastewater with physical, chemical and biological treatments that ensure the removal of these substances below the levels required by environmental regulations, and even bring them to levels below the detection limits of high-precision measurement methods such as gas chromatography. Advanced treatment systems such as reverse osmosis are also used, which allow wastewater to be reused instead of discharging it.

The presence of the aforementioned pollutants in the discharges is associated with the natural composition of the crude oil, which means that a large part of the wastewater and production water treatment focuses on removing the hydrocarbon content in the water.

During 2020, Ecopetrol continued the implementation of its Plans for the Reconversion to Clean Technologies in Management of Discharges (PRTLGV) approved by the environmental authorities, which contemplate 32 points of discharge of industrial wastewater.

During 2020 Ecopetrol continued the implementation of its Plans for Reconversion to Clean Technologies in Management of Discharges (PRTLGV) approved by the environmental authorities. These plans envisage 32 points of discharge of industrial wastewater, which will allow the company to increase the reuse of water and reduce the volumes of fresh water collection and discharges.

Noteworthy is the recent fulfillment of the plan to convert to clean technologies in the management of discharges of the Orito and Churuyaco production fields, which achieved the goal of total elimination of discharges to surface bodies.

* does not include the volume of water delivered to the community

Water is a vital resource for Ecopetrol’s operations and projects. For this reason, risk analyses associated with the resource are continually carried out, in which possible scenarios that may affect the continuity of operations are evaluated and anticipated.

The volume of water captured by Ecopetrol during 2020 represents only 0.003% of the total surface water supply in the country in the average year, estimated at 2 billion cubic meters per year according to the 2018 National Water Study. However, this supply is not evenly distributed in space and time, as a large part of it as concentrated in the areas of less demand such as Orinoco and the Amazon, while in the Andean and Caribbean region (the areas of greatest demand), there is less availability of water. These conditions bring difficulties in some areas of the country in relation to the availability of water, which can in turn cause conflicts between the different users of the resource.

To assess this risk, Ecopetrol has identified the facilities that are in hydrographic subzones with a very high or critical water use rate (greater than 50% in the average year according to the 2018 National Water Study) and has developed different strategies to decrease their dependence on fresh water in these facilities. The table below shows the consolidated fresh water intake, production water, discharges and consumption of the facilities located in these areas. Detail by installation are presented on the map.

Ecopetrol participated in the initiative of the Ministry of Environment and Sustainable Development to follow up on the implementation of Resolution 631/2015. We also partook part in the workshops for estimating consumption modules, and in the workshops to update water reuse regulations.

An analysis of Petitions, Complaints and Claims (PQRs) related to water resources is carried out annually in order to identify the risks associated with the water resource that may impact Ecopetrol’s reputation and the relationship with stakeholders. Once the cases are received at the Citizen Participation Office (OPC), they are escalated to the corresponding areas for verification and analysis, where the validity of the case is determined and an action plan is proposed depending on the response to the petitioner.

147 PQRs related to water resources were received in total – i.e. 33% less as compared to the previous period. These Petitions, Complaints and Claims (PQRs) correspond to approximately 0.6% of the total PQRs received by Ecopetrol’s Citizen Participation Office (OPC). Once received, the cases are escalated to the corresponding areas for verification and analysis, where the validity of the case is determined and an action plan is proposed depending on the response to the petitioner. The graph below shows the distribution of the PQRs associated with water resources in 2020.