Environmental planning seeks to manage and obtain the required environmental authorizations in a timely manner to legitimize operations and projects that ensure compliance with business goals. 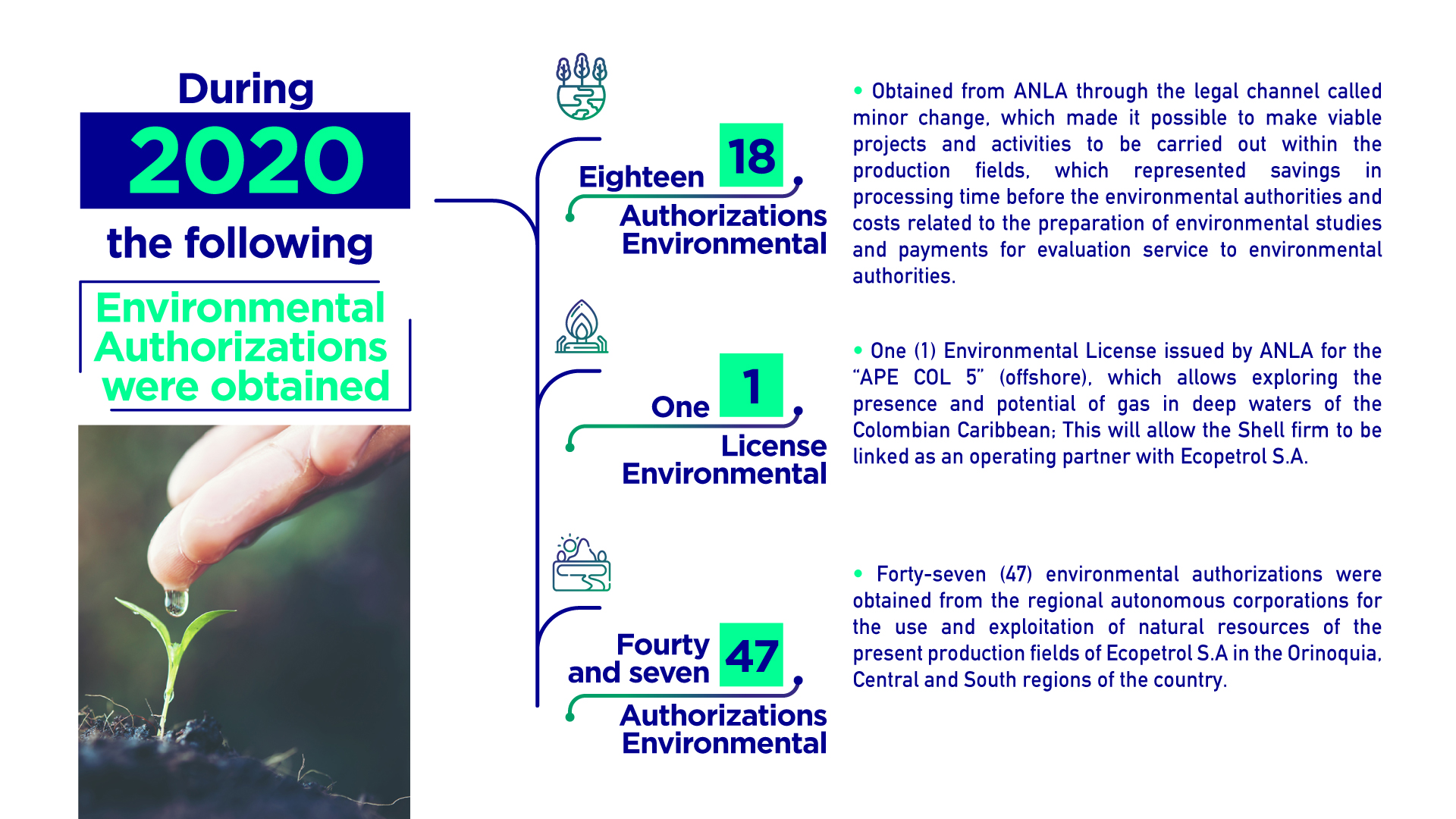 Among the environmental authorizations obtained during 2020 and that generated greater benefits in terms of contribution to the continuity of operations and projects, as well as the implementation of projects that apply principles of circular economy and that result in benefits for the environment, the following stand out:

Approval for the installation and operation of self-generation projects of energy in the Yariguí, Cantagallo, Casabe, Huila and Rubiales production fields that enables the execution of solar projects with an installed capacity of 107.79 5 MW, which allows progress in compliance of the renewable energy goal of 300 MW by 2022 of Ecopetrol SA,

The Colombian state, through the National Environmental Licensing Authority - ANLA, an entity that is part of the National Environmental System, is in charge of evaluating and authorizing projects, works or activities in the Oil & Gas sector. To comply with a project in legal and environmental terms, the petitioner files before the authority the request for an Environmental License, which "is a process used for planning and managing projects that ensures that human and economic activities conform to the ecological and resource restrictions and in this way becomes a key mechanism to promote sustainable development in the nation ”. (ANLA, 2020)

The environmental licensing process begins by filing an Environmental Impact Study carried out by the interested party, which includes, among other aspects, the identification of environmental impacts with project and without project, these can be classified as indirect, synergistic and cumulative, Likewise, the evaluation and assessment must be carried out with methodologies according to the nature of the project by justifying the assessment of each impact, whether negative or positive. Additionally, the Environmental Impact Study proposes environmental management programs that constitute a detailed description of the set of actions, measures and activities that, as a result of the environmental assessment, are aimed at preventing, mitigating, correcting and compensating the identified environmental impacts that are caused by the development of a project, work or activity.

In accordance with the business goals that Ecopetrol SA has established, its main objectives are aimed at discovering and delimiting accumulations of commercially viable hydrocarbons for onshore and offshore projects, in addition, the company seeks to manage the best strategy for the production of crude oil and gas that is carried out directly or in association with other companies. These activities are executed once the projects are technically defined, from there the environmental planning phase begins, which allows identifying, according to the location and scope of the same, the overlap and simultaneity with other projects, environmental zoning, restrictions and environmentally and socially areas. factors that affect the design and development of the project, as well as the definition of the action plan, applicable legal requirements and schedules.

In the last three (3) years, Ecopetrol SA has submitted to the National Environmental Licensing Authority - ANLA, the request for new environmental licenses, license modifications and / or modification of Comprehensive Environmental Management Plans, among which the following stand out. following:

Ecopetrol S.A. is a company committed to protecting the archaeological heritage of the Nation and raising awareness in relation to the importance of this heritage for the construction of local identities and the reconstruction of our historical processes, with the implementation of actions both internally and of the Allied companies as well as in the territory with the local populations where the projects are developed. The actions are focused on strict compliance with current regulations in relation to the development of preventive archeology programs, which entails archaeological characterization actions, archaeological excavations, support during the construction of projects and the holding of workshops and training for personnel and communities involved.

On the other hand, implementations of archaeological management plans have been carried out in projects in Oriente (Rubiales), Orinoquía (Campo Castilla, Chichimene, Modulo Eléctrico), Central (Llanito, Casabe, Tisquirama) that have allowed the archaeological accompaniment to the activities of civil works and the execution of archaeological excavations of relevant archaeological contexts, in which those carried out in Campo Castilla, Chichimene and 50k stand out, located in Orinoquia, Liria YW-12 in Aguazul, Casanare, Campo Llanito and Campo Casabe - Peñas Blancas in the Central region, providing valuable information for the investigation of local problems of periodization, environmental characterization and ceramic and lithic typology, with finds that add up to more than 50,000 archaeological elements.

Thus, in terms of the balance of activities during 2020, the following actions were carried out:

Results of the prior consultation process

In the areas of the operation with the presence of ethnic groups, Ecopetrol implements the Guide for Relationships with communities of Ethnic Groups. For more information, see Social Dimension: Indigenous Communities.

A summary of the results obtained for the year 2020 for Prior Consultation processes is presented, information that should be read in a complementary way with the chapter on Relationship with Communities of Ethnic Groups:

In order to carry out interventions on a landscape scale and to comply with obligations of i) environmental compensation, which are generated by the use and exploitation of renewable natural resources and ii) of the 1% investment, which is materialized by the catchment of surface or underground water referred to in the paragraph of article 43 of Law 99 of 1993, Ecopetrol identified and limited priority areas called "nuclei" where the areas of operation, areas of environmental and social interest coincide. In these nuclei, multifunctional landscapes are defined and prioritized, seeking ecological connectivity between natural areas and generating benefits for local and regional biodiversity.

Strategy for the implementation of compensation and investment obligations of 1% in Ecopetrol S.A Source: Ecopetrol, Vice-presidency HSE

The actions to implement these obligations are designed to generate shared prosperity with the communities surrounding Ecopetrol's operations, among which are mentioned i) agreements for the conservation of areas of environmental importance with the owners, holders or holders, where the conservation of ecosystems through compensation in kind such as agroforestry, silvopastoral, beekeeping, meliponicolas, efficient stoves, photovoltaic systems, water harvests and ecological homes, among others; ii) protective reforestation; iii) ecosystem restoration in any approach (recovery, rehabilitation and restoration); iv) purchase of land for conservation and v) hydrometeorological monitoring in the basins where surface or underground water catchments are made. Figure below.

Lines of compensation and investment of the obligations in execution

With the fulfillment of these obligations there would be:

More than 1200 Conservation Agreements through in-kind incentives
More than 13,000 hectares in conservation.

From the strategy defined by Ecopetrol S.A for the fulfillment of environmental obligations, the implementation of conservation actions is promoted from new and innovative ways and mechanisms that allow to contribute to the generation of better social, economic and environmental conditions for the country. For this reason, new and better practices are sought in the territory, which seek to reduce conflicts between the conservation of biodiversity and its ecosystem services and human activities, for which new conservation strategies and tools have been developed, which are more efficient, less expensive and that have positive impacts on the social and economic conditions of the communities in the areas where they are developed.

In this sense, Ecopetrol is committed to conservation from the signing of conservation agreements in the hydrographic areas where it operates that have as an incentive for the owners, holders or holders, the design and implementation of sustainable projects with an ecological and social approach, prioritizing the use of bio-inputs, which allow social inclusion, regional development, the promotion of ecosystem services and the conservation of biodiversity. Among the proposed incentives are systems associated with water harvesting and the installation of photovoltaic panels, which not only contribute to the conservation of biodiversity, but also to the generation of sustainable energy, giving participants who require it access to generated electricity. from renewable sources. This, in turn, contributing to the fulfillment of SDG 7 Affordable and non-polluting energy and SDG 12 Responsible production and consumption.

As of December 31, 2020, Ecopetrol S.A. had 1,383 obligations. The highest volume of obligations derives from the forced investment of 1%, followed by permits for forest use before the regional environmental authorities, in third place compensation for changes in land use and in fourth place, compensation for water concessions .

The departments with the highest number of obligations are Casanare, Meta, Norte de Santander and Santander.

Of the 1,383 obligations, 569 are closed, 330 in the closing process, 238 in contracting, 99 in execution, 61 in suspension (the activity that would generate the obligation has not started), 37 in approval of the environmental authorities, 36 in consultation with stakeholders and 13 in formulation.